Binding Financial Agreements: The Details You Need to Know 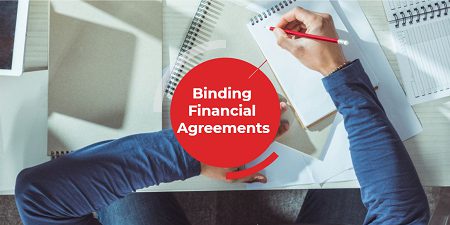 What is a binding financial agreement?

A BFA is a document (or series of documents) that govern your property interests at the end of a marriage or a de facto relationship. This includes same-sex couples, and both de facto and married couples.

A BFA is a way to contract out of the property rules of the Family Law Act 1975 (FLA). As such, a couple can use a BFA to set out how their assets and liabilities will be divided if their relationship breaks down. A BFA may establish the distribution of property, debts, spousal maintenance and other financial matters.

A BFA can be a practical and effective way to safeguard your financial interests in case your relationship breaks down. But what makes BFAs contractually binding and can they be overturned by a judge? Read the important facts about binding financial agreements below.

What should a binding financial agreement include?

A Binding Financial Agreement will specify how the parties will divide their asset pool in the event that the relationship fails. These agreements deal with property and financial resources, and are generally broken down into clauses that set out:

A Binding Financial Agreement can address practical financial issues that are specific to the couple, such as the need to:

When can a BFA be entered into?

Many people assume that you can only enter into a BFA before a marriage. Actually, a couple can sign a BFA at any point before or during a relationship (either marriage or de facto), and even after the breakdown of the relationship.

Protecting your wealth using a BFA

A properly prepared BFA provides certainty for both parties in a relationship. You may wish to consider a BFA if:

Advantages of a BFA

While we all hope for ‘happily ever after’, relationships do sometimes break down. Given this reality, and the prospect of lengthy court battles and the associated emotional and financial stress, many couples consider entering into a Binding Financial Agreement.

A Binding Financial Agreement allows a couple to agree in advance on an acceptable division of their assets. It can be a cost-effective way to protect the assets you have worked hard to earn, and of safeguarding your future income or inheritance. Preparing a Binding Financial Agreement can make sure you (and your children) are financially secure if the relationship ends.

A correctly executed Binding Financial Agreement can provide a degree of certainty to a couple. In the unhappy event that a relationship does not work out, the couple can at least avoid unnecessary arguments, and drawn out and expensive legal proceedings.

Disadvantages of a BFA

However, it’s important to bear in mind that BFAs are complex contracts and require specialised family law advice. A lawyer must have the necessary knowledge and experience to execute the agreement in a way that is actually legally binding. Whatever you do, you should not choose a lawyer to draft or advise you on a BFA based on how much they charge. You must take care to select a lawyer who specialises in Family Law and has experience in drafting BFAs. Unfortunately, it does happen that a BFA is set aside by a court because of poor drafting or inaccurate advice.

In addition, a BFA must be highly tailored to the individual parties. As such, the lawyer must provide strategic advice while drafting and/or advising on the document.

Unified Lawyers have extensive experience advising on all aspects of BFAs, including drafting documents to vary the terms of an existing BFA. It is essential to get a BFA right the first time, and Unified Lawyers has the knowledge and experience to give you peace of mind.

What makes a BFA binding?

Although a BFA is a way of avoiding the rules of the Family Law Act, the BFA itself is only enforceable if it complies with certain requirements of the Act.

In summary, a financial agreement is binding on the parties to the agreement if, and only if:

The Family Law Act states that each party to a BFA must receive independent legal advice to make sure they understand their rights and the terms of the agreement. The legal advisors summarise their legal advice in a signed certificate that is attached to the Agreement.

A binding financial agreement should be reviewed every couple of years or after the birth of a child or other significant event.

When will a BFA not be binding?

The short answer is that a BFA  is binding, as long as it has been set up correctly. The courts can void or set aside any agreement that fails to met the required conditions. It is most common for an agreement to be set aside if the parties failed to obtain independent legal advice or drew up the agreement themselves without legal assistance.

Can a binding financial agreement be overturned?

Even a binding BFA can be overturned by the parties themselves, or through a court order. The couple can create a new binding financial agreement that explicitly states that the previous agreement is overturned. This is the only way to update an existing agreement.

Alternatively, the couple can choose to terminate the BFA altogether. As with the original BFA, a termination agreement is only binding and enforceable under certain conditions. Specifically, both parties must sign the termination agreement after they have received independent legal advice as to their rights and the impact of terminating the agreement.

Can the Federal Circuit and Family Court of Australia set aside a BFA?

The Court can overturn a BFA if they are not properly drafted and executed. The Court can also set aside the agreement on the basis that one of the parties:

When a BFA is set aside, the couple can negotiate a property settlement privately, or either party can apply to the court for a financial order.

📝 Can you do your own binding financial agreement?

You may be tempted to try and create your own binding financial agreement without going to the expense of contacting a lawyer. You might even have found a DIY kit that makes you feel confident in your ability to handle the matter by yourself. Unfortunately, a financial agreement will not be honoured in court unless it is prepared according to certain rules and policies.

A qualified lawyer need to prepare your BFA so that it is legally valid and covers all the relevant issues. The terms and clauses that need to be included will probably be unfamiliar.

Of course, you may be able to limit the costs associated with entering into a BFA by doing as much prep work as possible before going to see a lawyer. Your lawyer will find it easier to prepare the document if you prepare ahead of time a comprehensive list of your assets and your instructions. This will help to minimise the time and expense involved in drafting the agreement.

Separate legal practitioners must then review the agreement and represent each party’s interests in the matter. Each party must confirm that they provided legal advice on the document and sign to that effect.

💲 Who pays for a binding financial agreement?

💰 Why are BFAs so expensive?

Each lawyer must provide their client with a summary of the law as it applies to their circumstances. This means that the lawyer must advice both on the meaning of the terms of the proposed BFA and what the position would be under the Family Law Act.

⁉ Is it worth getting a Binding Financial Agreement?

If your relationship ends, you will almost certainly need to negotiate a property settlement with your former partner. Because many relationships end on less than friendly terms, the parties often have to resort to a stressful, expensive and time-consuming court proceeding in order to settle their disagreements. From a purely financial point of view, having a Binding Financial Agreement in place will save a couple from spending tens of thousands of dollars on legal fees and court costs (and potentially much more). It is often worth getting a BFA to reduce uncertainty and increase the potential for a couple to have an amicable separation.

A legally Binding Financial Agreement is an enforceable contract. The only reason why you would need to go to court would be if one of the parties is refusing to comply with the terms, or if you are seeking to overturn the BFA altogether.

It may seem pessimistic and even unromantic to prepare a binding financial agreement while you are in a happy relationship. Actually, it is just a practical way of protecting yourself and your partner in the hopes that you will never have to rely on the agreement.

Unified Lawyers are here for you if you need any assistance with a Binding Financial Agreement.

Response within 30 minutes during business hours